In the Christian religion the birth of Jesus Christ is celebrated in December (Christmas), his death in March/April (Good Friday)  and his ascension to Heaven in May (Ascension Day).

Buddhism is more efficient and commemorates birth, death and the reaching of Nirvana of Gautama Buddha on the same day, called Wesak. It is celebrated on the Full Moon day in May, which fell this year on May 24. I was in Taiping at that time, visiting my friends George and Jennie.

There are several Buddhist temples in Taiping. In the morning we visited the Thai Wat Phodhiyaram  (Thai)  and the Bodi Langka Ram Temple (Sri Lankan), located next to each other in Assam Kumbang, Taiping. And in the evening we went to the Sasanarakkha Buddhist Sanctuary (SBS), high up in the hills of Tupai. All of them belong to the Theravada school of Buddhism.

As you know  I am a secular humanist, opposed to religion. But I feel quite attracted to the philosophy of Theravada Buddhism. I do not believe in reincarnation, but the concepts of Anicca (impermanence), Dukkha (suffering) and Anatta (not-self) appeal to me. Although I must confess that I have not yet made much progress on the Noble Eightfold Path  🙂

In Sri Lanka I have attended Wesak many years ago. There it is a very solemn, quiet event, people are dressed in white sarongs and visit the dagoba (temple) to offer flowers. There may be some food, but that is for the poor.

How different was the atmosphere this time in Malaysia! Many people come just for the free (vegetarian) food, I think, I saw many Indian (hindu) people. In the Thai temple a long queue of devotees was waiting to pour water on a Buddha (and then take this holy water home to bathe themselves). More Mahayana than Theravada…? 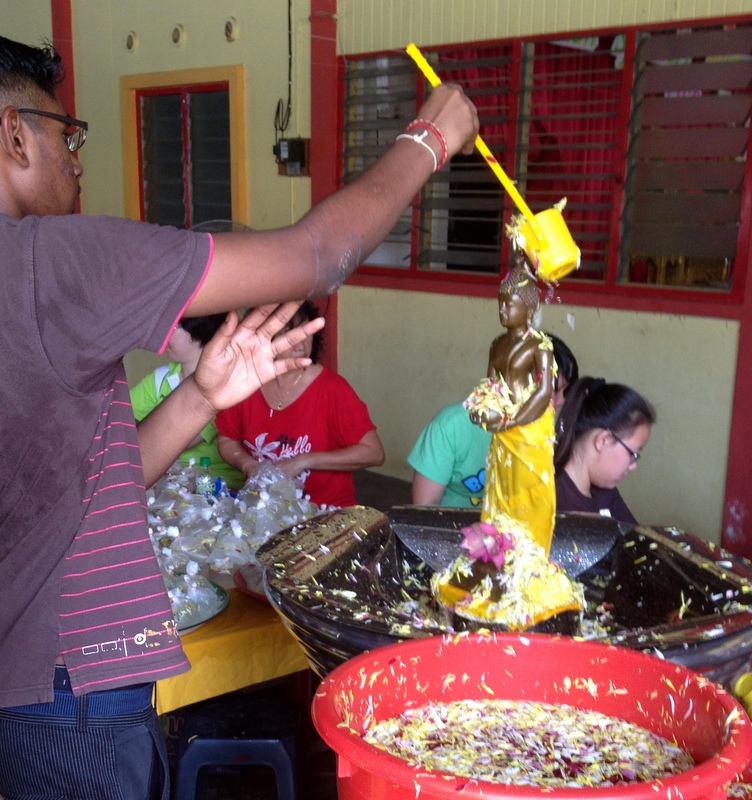 Many people had been lighting candles, a very nice sight. 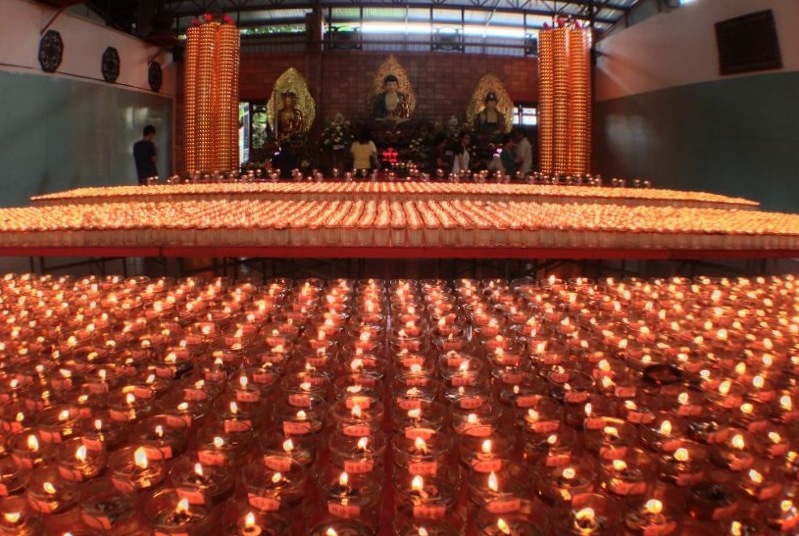 Here are a few more pictures taken during our morning visit

In the Thai temple

The bo tree in the Sri Lankan temple

The SBS is not a real temple but a Buddhist training and meditation center. I had visited it several times before, once during the Katina ceremony, when the devotees give new robes to the monks, very impressive.

As the Sanctuary, high up in the hills, can only be reached by a narrow winding road, you had to park your car at the cemetery(!) down the hill, after which volunteers with 4WD’s shuttled you up. Well organised!

From the sanctuary you have a magnificent view of the sunset and Taiping, deep down. 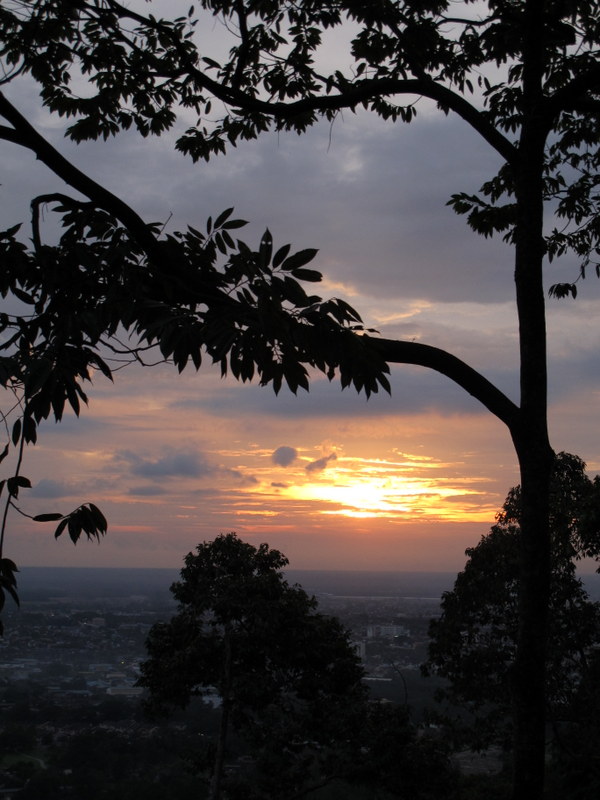 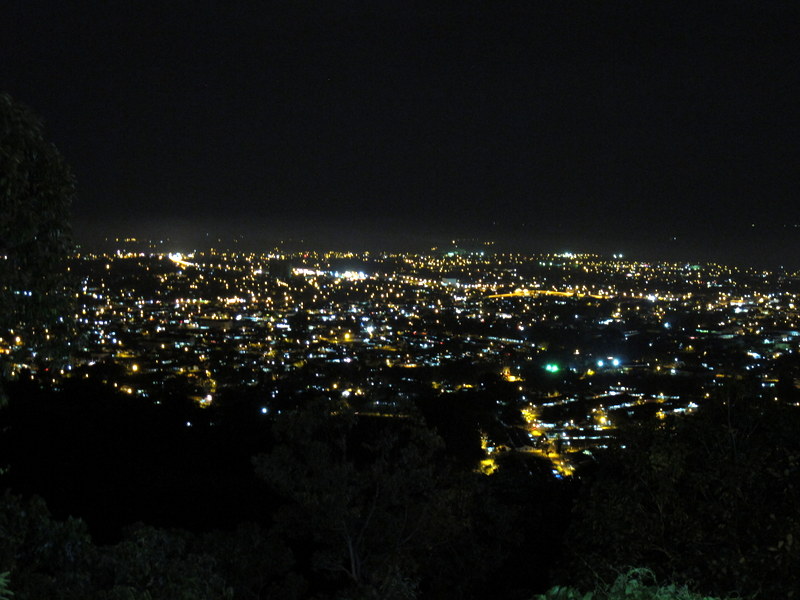 Focal point of the sanctuary is this statue of the Buddha in the so-called Dhyana (meditation) Asana. The back of the right hand rests on the palm of the other in such a way that the tips of the thumbs lightly touch one another. 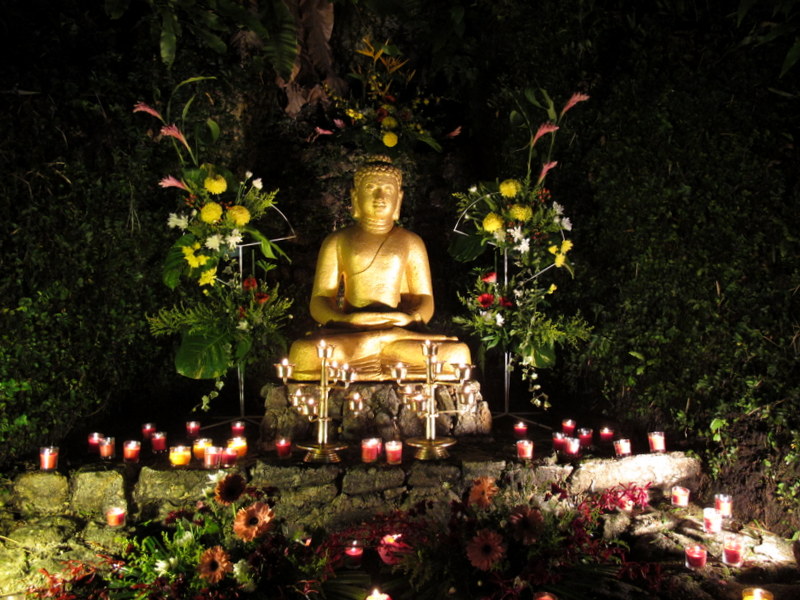 Compared with Sri Lanka, also here the atmosphere was more festive, there were even fireworks. And lots of food…:-) We saw  a  few Kungming lanterns (hot air balloons). Altogether it was a bit too carnavalesque to my taste.

Here is a selection of pictures

Walking to the sanctuary

Waiting for the lighting ceremony

Nice kids, without a clue what was celebrated.

After the ceremony was finished, the thousands of visitors had to be transported back to the parking. Long queue, but kudos for all the volunteers!

Here is a video of the fireworks