A first impression of our trip to Japan, 6-22 March 2018. I took more than 1500 photos, it will take time to condense them into reports. Here is a travelogue with some highlights.

On 6 Match we took a JAL nightflight to Tokyo, where we arrived early the next morning. A connecting flight brought us to Osaka. We had (on purpose)booked seats on  the right side of the plane and were rewarded by a spectacular aerial view of Mount Fuji 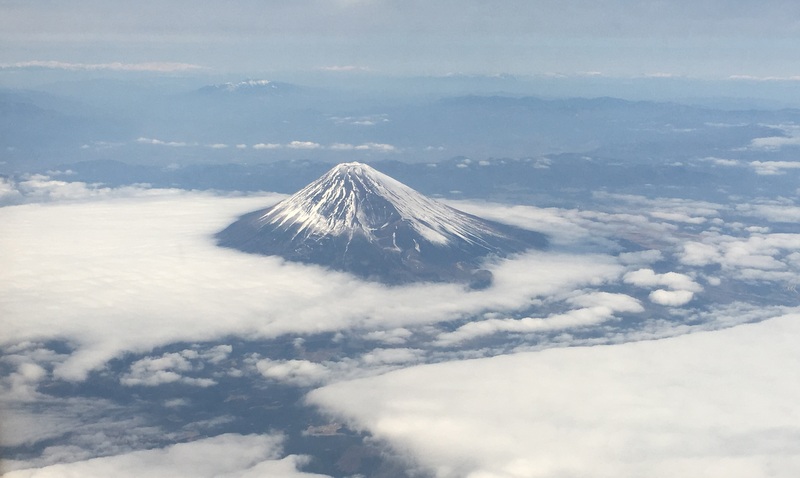 From Osaka we took a train to Tanabe in the Wakayama prefecture, where we stayed overnight. It was cold!

In the morning we visited the Tokei-jinja Shrine in Tanabe. 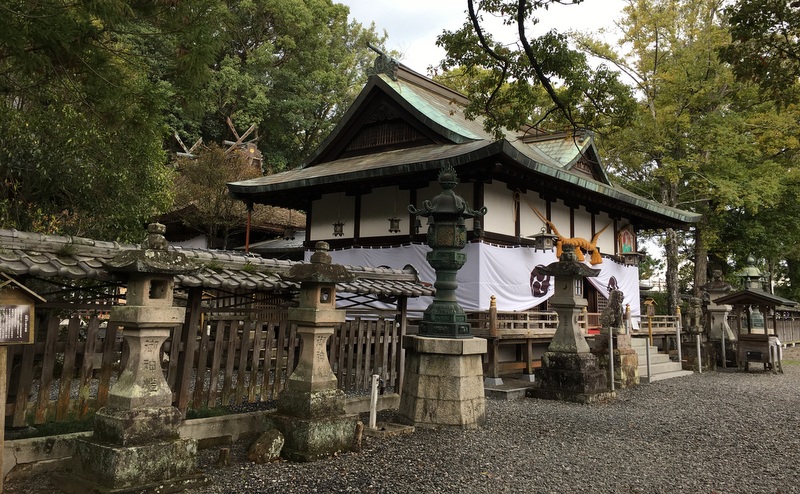 After our visit we took a bus to Yunomine Onsen, where we stayed two nights. It is a quaint rural village with the smallest onsen of Japan. This Tsubo-Yu onsen, the wooden shed in the center of the image, has actually been declared a UNESCO World Heritage Site! 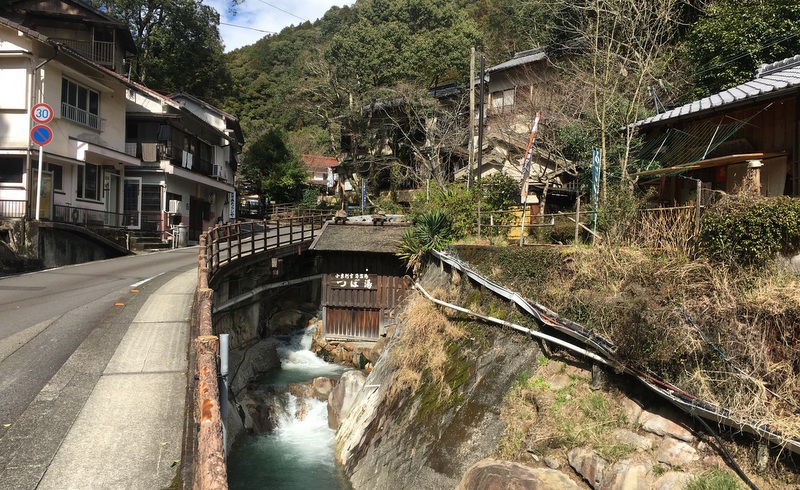 We stayed in a small guesthouse,where we also had our (delicious) dinner and breakfast 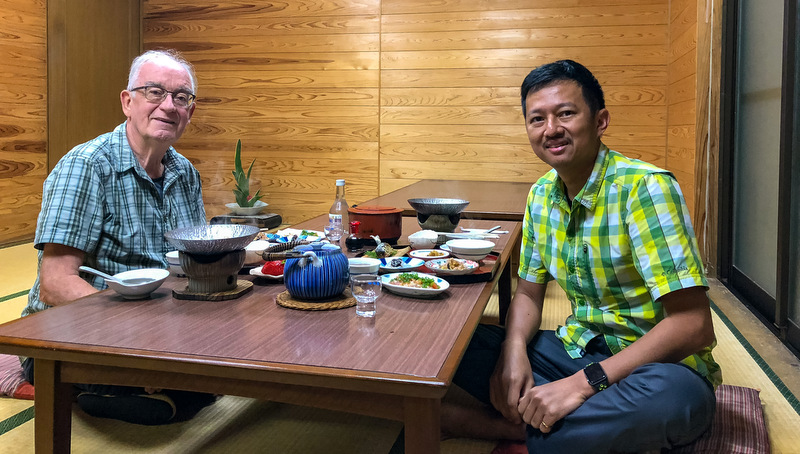 The reason that we wanted to visit this part of Japan, was not only because of the many onsen , but also because there are numerous pilgrimage trails in this region, the Kumano Kodō. You can hike here for weeks, we only walked one trail, through beautiful forest, from Yunomine to the Kumano Hongū Taisha shrine 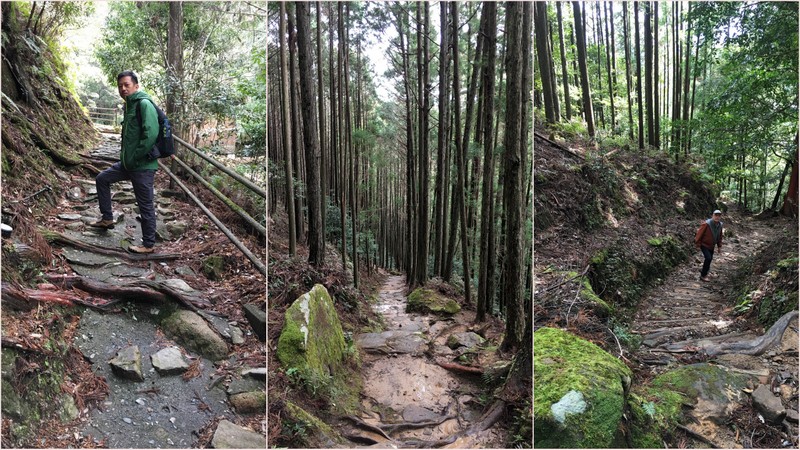 Kumano Hongū Taisha, one of the three main Shinto shrines  of the Kumano Kodō 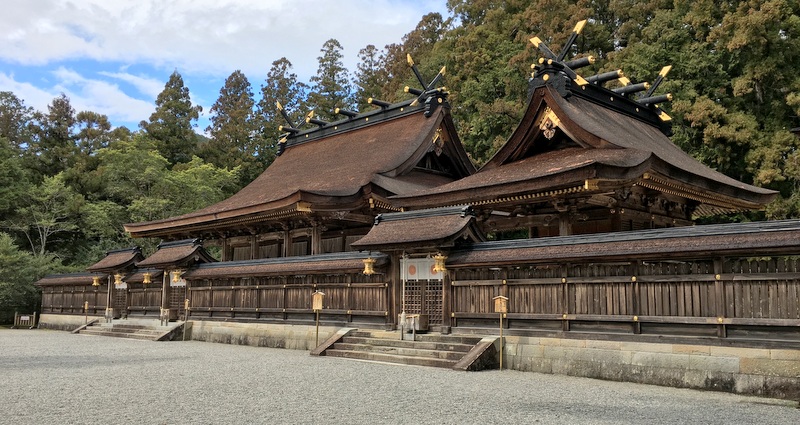 After our hike, we relaxed in the Tsubo-Yu onsen. You must book for it, maximum two people, maximum 30 minutes. A unique experience…:-) 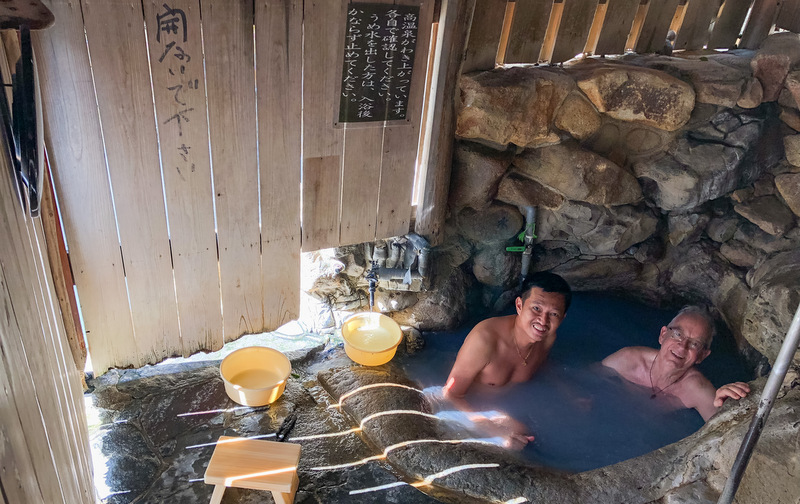 With bus and train to Kushimoto, the southernmost point of Honshū., Japan’s main island. The tourist attraction here are the Hashigui-Iwa rocks, a natural “work of art” 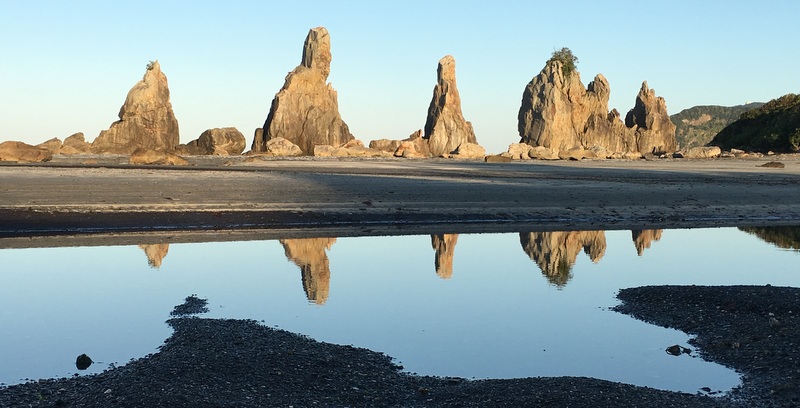 We had an elaborate sushi dinner here and, back in our hotel, a big, crowded onsen, with both an inside and an outside bath.

The next morning we enjoyed the sunrise from our hotel room.

This day we visited another of the Kumano Kodō shrines, the  Nachi Taisha shrine with the Nachi waterfall, the tallest fall of Japan. We stayed in a small hotel, with a view of the waterfall from our room..:-). And an exquisite dinner prepared by the kitchen staff

Left the impressive Nachi fall (130 m tall), in the middle a part of the shrine and right the iconic image of the three-tiered pagoda with the fall in the background

The sakura season had not yet started, spring was late and it was colder than we had expected. But here and there we could enjoy already nice cherry blossom trees. 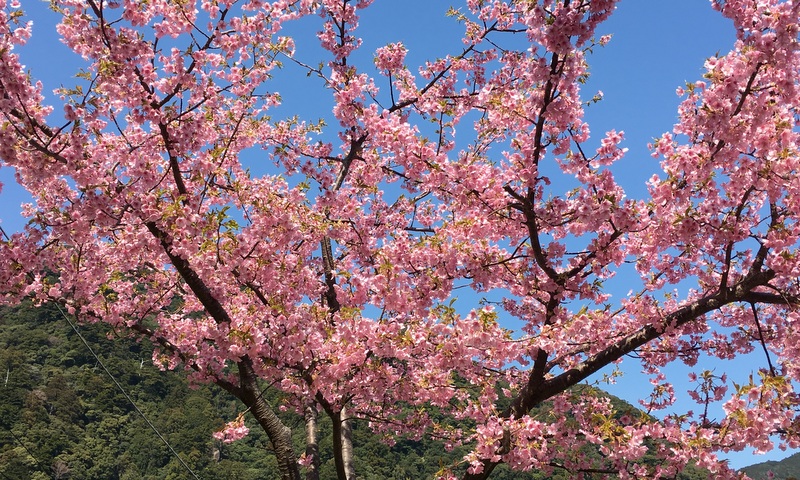 Our next stop was Toba, on the coast, the center of the  pearl fishery and famous for its seafood. Here we had our most exotic seafood dinner. Left abalone sashimi !

In the past the pearl oysters were caught by ama’s, the diving ladies. Now they still do it for show, but the production process has become high-tech.

For the next night, Aric had booked accommodation in a Buddhist temple (!) in Agui, a small town south of Nagoya. The easiest way to go there, would have been to go first by train to Nagoya and from there to Agui. We took a more adventurous route, first a ferry from Toba to Irako, from there a bus to Toyohashi, then by train to Agui. We were lucky with the timing and reached Agui station around 4 pm, where the wife of the Master of the temple was waiting for us.

The temple practises Jodo Buddhism, the most common branch of Buddhism in Japan. 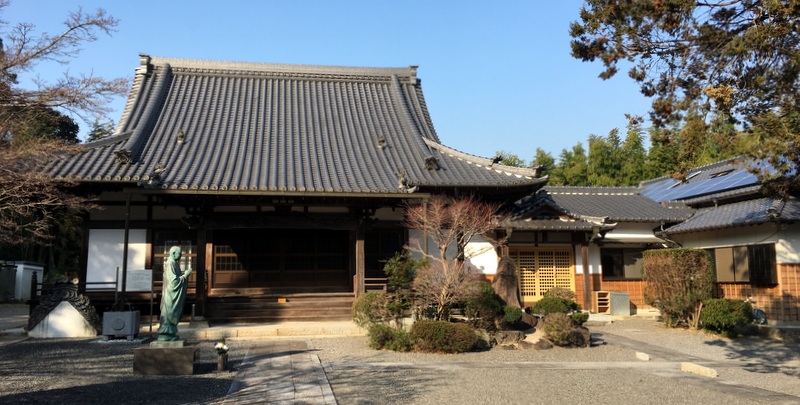 Left our rooms and right the temple, at the other side of the corridor. Food was served in our room, we shared the bathroom with the family, it was a very special experience

After breakfast and a short exploration of the village, we took a train to Nagoya, where we had booked a hotel for two nights. In the afternoon we visited the castle. Completely destroyed in 1945 by US army air raids, it has been rebuilt. Not as impressive as the Kyoto and Osaka castles. The sakura was just starting to blossom.

Nagoya is not particularly interesting, so why did we stay two days there? And why didn’t we make our trip a few weeks later. so the sakura would be in full bloom everywhere? The reason was that we wanted to attend the  Hōnen Matsuri festival , held on 15 March each year in Komaki, just north of Nagoya. This fertility festival is more popularly known as the Penis Festival. Highlight of the festival is a procession where a giant wooden penis is carried around 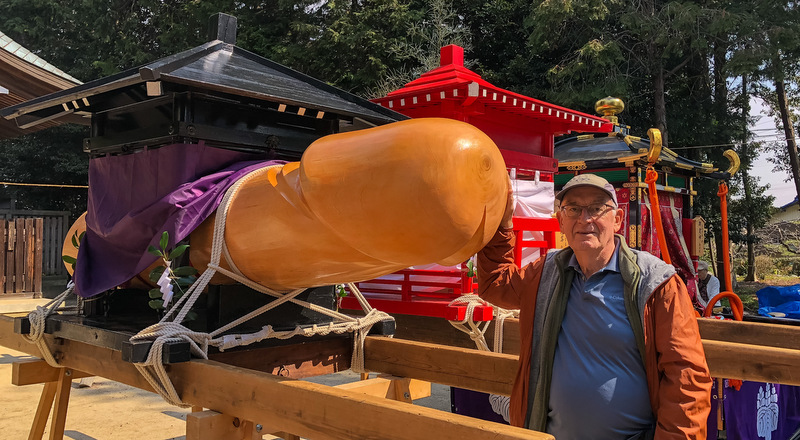 During the procession pretty ladies carry penises around, which you are encouraged to touch. There is a free flow of sake and everywhere are penises for sale as sweets, lollipops or ice cream. I took many pictures, will write a separate blog about the festival. It was an enjoyable experience.

We had three main targets for this Japan trip, the Kumano Kodō, the Penis Festival and the Fuji Mountain.  From Nagoya we took a bullet train north and changed to a smaller train for Kawaguchiko, at the foot of the Fuji Mountain. The mountain is often hidden in clouds, we had decided to stay here three days ,hoping that at least one day we would have a clear view. The start was not promising, when we arrived in our guesthouse, it was clouded and later it started to rain. Again a very Japanese style room. We had dinner in a tempura restaurant.

The next morning the rain had stopped and there was some blue sky! There is a famous viewpoint in Chureito, a short train ride from Kawaguchiko. I took already a “safety” shot from the station and that was a good idea, because when we arrived in Chureito and had climbed up to the pagoda, the mountain had disappeared in the clouds. Pity.

Back to our guesthouse, a bit disappointed. In the late afternoon, the sky cleared, the mountain became visible again. Near the village there was also a viewpoint, although without a pagoda. Before climbing up another safety shot, and again the mountain had disappeared when we reached the viewpoint. Frustrating.

The next morning we woke up at 6 am, the sky was now blue, but for how long? We walked up to the same viewpoint and this time we were rewarded. What a spectacular view. We were so happy.

Back in the village, we decided to take the bus up halfway the mountain. Because there was still a lot of snow, the Fifth Station was not yet accessible, the bus stopped at the Fourth Station. From the 5th station hikers climb the mountain in the summer season

But the view from the Fourth Station was also fascinating, especially the surrounding mountains, still covered with snow. We really were lucky.

The last night in Kawaguchiko we moved to another hotel, the most expensive hotel we have ever stayed..:-) . Not a room, but a suite. An onsen with a view of the mountain. A culinary nine course dinner. A once in a lifetime experience…:-)

View from the onsen 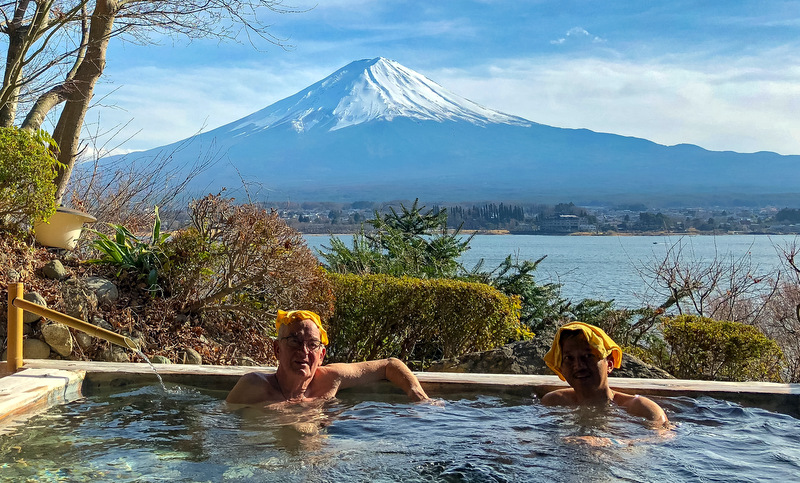 Dining in style, with a cup of sake. 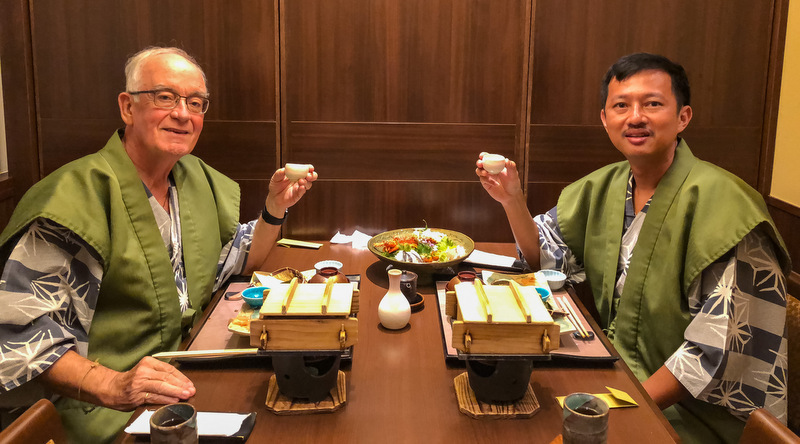 Our dinner, I forgot to take pictures of some dishes. Left the Assorted Appetizers, in the middle Four kinds of Assorted Sashimi. Never before had lobster sashimi…

What an extraordinary day.

The hotel shuttle service dropped us at the station, from where we took the train to Tokyo. What a contrast to be suddenly in a major metropolis. Here the view from our hotel room, with left the Tokyo Skytree, the tallest building of Japan 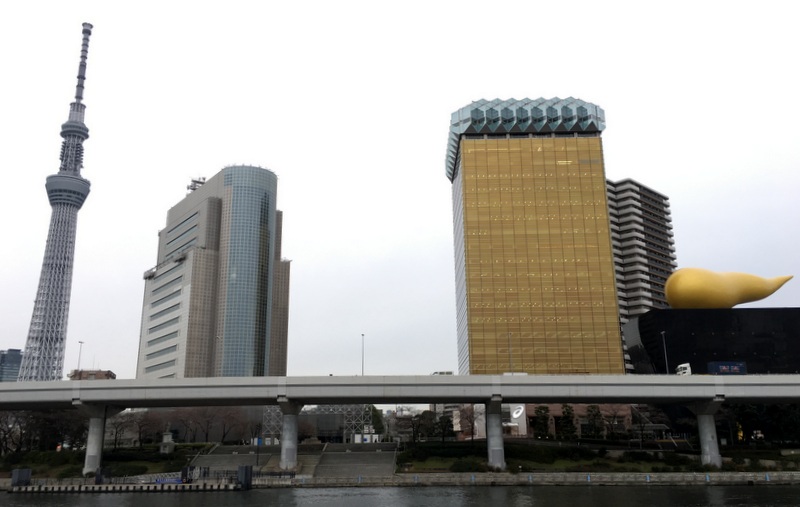 In the afternoon we visited the Sensō-ji temple, the oldest temple of  Tokyo and a major tourist attraction. I was surprised to see many girls in traditional Japanese dress, apparently most of them are actually tourists who have rented this clothing!

For our dinner we took the metro to the entertainment district. In the picture to the right, you can see me at the end of the bar, eating my noodles.

One of Aric’s friends is living in Chiba, 40 km from Tokyo, married to a Japanese dentist. We spent an enjoyable day with them and their two adorable daughters. We visited the Nihon-ji temple complex, high up in the hills. It was cold, windy and rainy, but we had great fun. The picture to the right shows the Kannon statue, quite recently created in 1966.

The Arhat sculptures (right picture) are much older, constructed in 1774

The main attraction is an impressive 31 meter high Buddha statue, the  Nihon-ji Daibutsu, the largest rock-carved Buddha of Japan (1783) 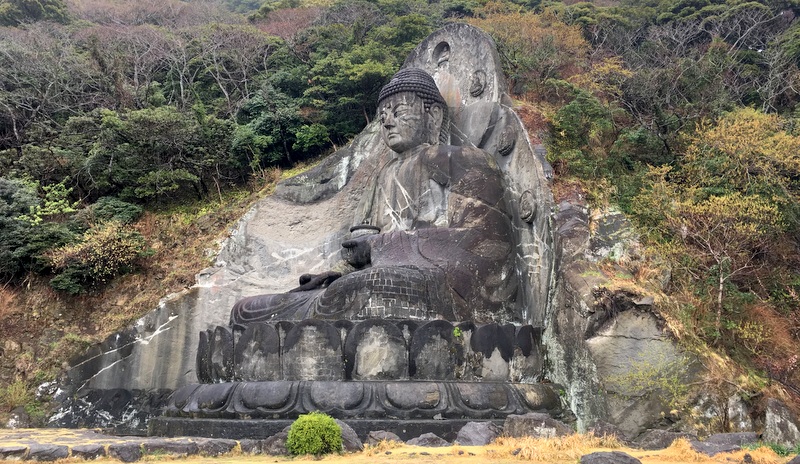 After our visit Kimberley and Kubo invited us to a seafood lunch in a restaurant nearby.

On our way back we crossed the Tokyo Bay on the Aqua Line , an expressway consisting of a bridge-tunnel combination. Where the bridge becomes a tunnel, an island has been built (left picture). In the middle you see part of the machine used to dig the tunnel. After crossing over the bay, we had a final stop in Yokohama for a visit of the Ramen Museum, where you can try all varieties of ramen, the famous Japanese noodle dish (right picture). A rewarding, full day. Hopefully we can return their hospitality soon.

Our last day in Japan. The beginning of spring, but no spring weather. Rain the whole day. We decided to take it easy, had a look at some modern buildings and visited in the afternoon the Ueno park. The sakura season had started officially and there were already lots of flowers, but one or two weeks later it will probably much more impressive. Below, right picture, the famous Tokyo Tower at night, half hidden in the clouds, quite scenic

Flowers in the rain 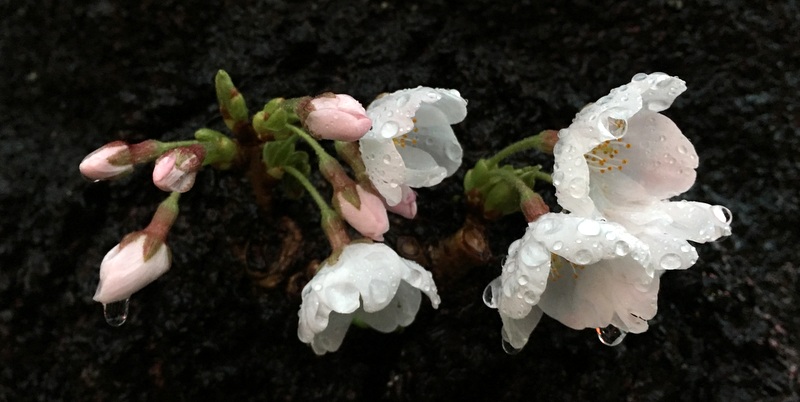 Back in our hotel, we enjoyed the onsen. Actually this is a sento, an onsen uses natural volcanic spring water, rich in minerals etc, a sento uses heated tap water. For those not familiar with the Japanese onsen culture, before entering the bath, you must wash yourself thoroughly (right picture). You bath nude, nowadays male and female baths are separate. Tattoos are not allowed, and there are more rules and regulations. We are addicted to it, during our trip we had an bath almost daily, often twice a day. 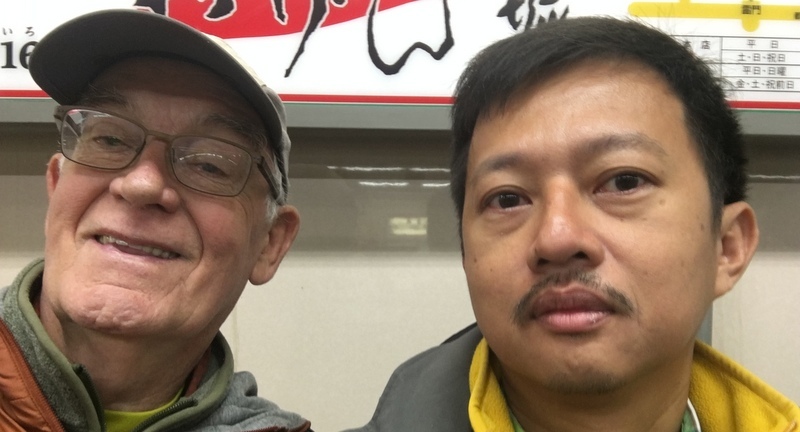