To celebrate the 60th birthday of Dutch photographer Erwin Olaf a double retrospective exhibition of his work has been held in the Gemeentemuseum and the Photography Museum, both in Den Haag.

I have always been a fan of him, so during my recent trip to the Netherlands, Aric and I made a day trip to Den Haag. The Gemeentemuseum is one of my favourite museums. The building, designed by Berlage and constructed between 1931-1935, is an artwork itself, and the museum houses the world largest collection of Mondrian paintings. My last visit was in 2017, More museums in Den Haag

I was very impressed by the Erwin Olaf exhibition. I was familiar with his older work, but not really aware of his development during the last decades. As the Gemeentemuseum describes him, he is not only a photographer but has become a digital image-maker and storyteller.

Here are two of his recent works, that especially fascinated, and also intrigued me.

What struck me is the lack on interaction between the two persons. They seem to be living in their own world. Here are a few more examples.

More persons, or one only, I get the same feeling of loneliness and isolation. With all of these (large-scale) photographs, you are wondering about the story behind it. And of course admiring the sheer technical perfection!

A selection of portrait photos

Last year he has made a widely acclaimed series of portraits of the Dutch Royal Family.

I enjoyed this exhibition of his recent works very much! Maybe also because some of his photographs reminded me of works by other favourite artists of mine 😉

Here is David Hockney‘s painting Portrait of an Artist (Pool with Two Figures) (1972).

Before moving to the Photography Museum for the second part of the exhibition, we first had some food in the restaurant. The right picture shows my failed attempt to evoke loneliness and isolation 😉

The exhibition in the Photography Museum is about Erwin Olaf’s development as a photographer. Most of the photos I had seen before, so we spent less time here. There was also work of photographers who have influenced him.

In his early years he was influenced by Robert Mapplethorpe 😉

It was a perfect outing. On our way back, by tram to the Den Haag train station, we passed the parliament buildings and decided to have a short walk around, because Aric had never been there.

Under this title the Groninger Museum has organised an exhibition of works created by the American artist David LaChapelle. 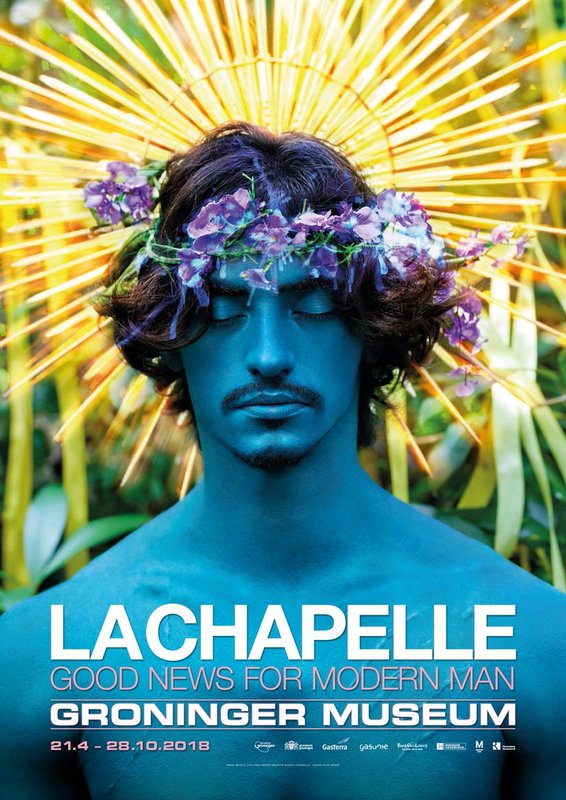 I had never before heard about this artist, but when I saw the poster of the exhibition I was intrigued, so I decided to visit the museum during my recent visit to Groningen.

I had no idea why the exhibition was named Good News for Modern Man and did a Google search. Surprising result: in 1966 the American Bible Society published a “modern translation” of the New Testament under this title! Why did LaChapelle choose this title? Time to find out more about him.

David LaChapelle (born in 1963) was 17 year old when he moved to New York, came in contact with Andy Warhol, Keith Haring and Jean-Michel Basquiat, and in the following decades acquired fame as a fashion and celebrity photographer. His style was easily recognisable, exuberant colors, references to classical art. Technically perfect, often decorating and transforming his (analogue) color negatives.Sometimes controversial too.

Around 2007 he got fed up with the empty glamour and glitter of the consumerist society, moved to the island of Maui and started to create “fine art” photography…:-). Art with a Utopian vision of a post-industrial era, where men will live in harmony with nature: Good News For Modern Man.

I found it a fascinating exhibition. Took many pictures, would have taken more if I had known more about him. I show them here in more or less chronological order. 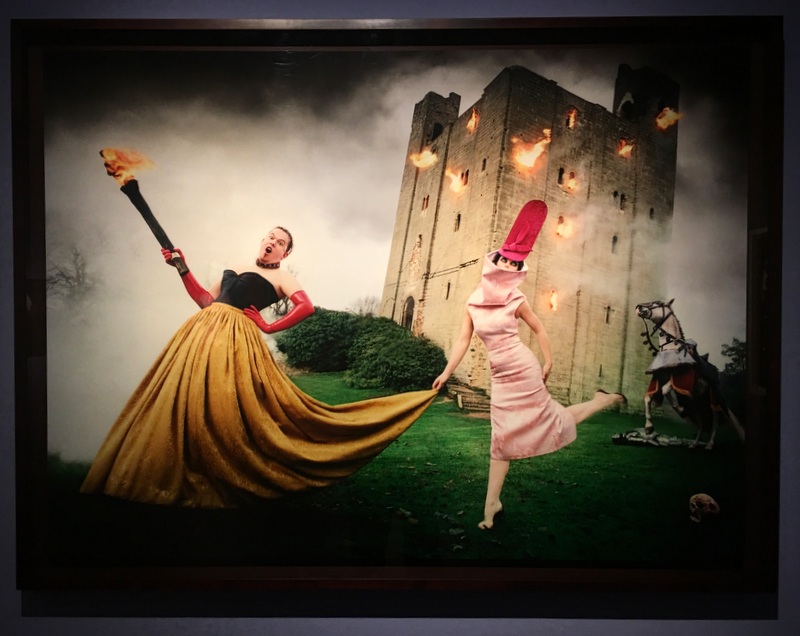 Burning down the house (1996), a portrait of the late fashion designer Alexander McQueen (left) and his “muse” Isabella Blow. The castle in the background is real! 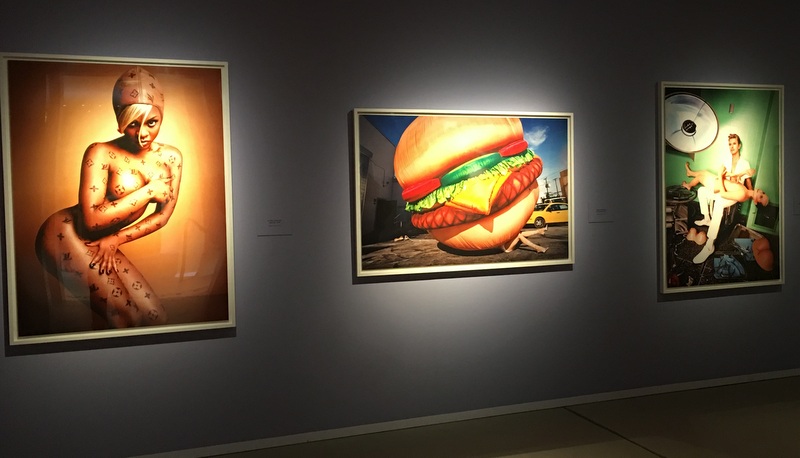 From left to right Lil’ Kim (1999), Death by Hamburger (2001) and  Self Preservation (1995). Lil’ Kim has Louis Vuitton tattoos, the Hamburger photo is actually a fashion ad for the shoes the model is wearing! It seems that David Bowie was not too happy with his portrait. 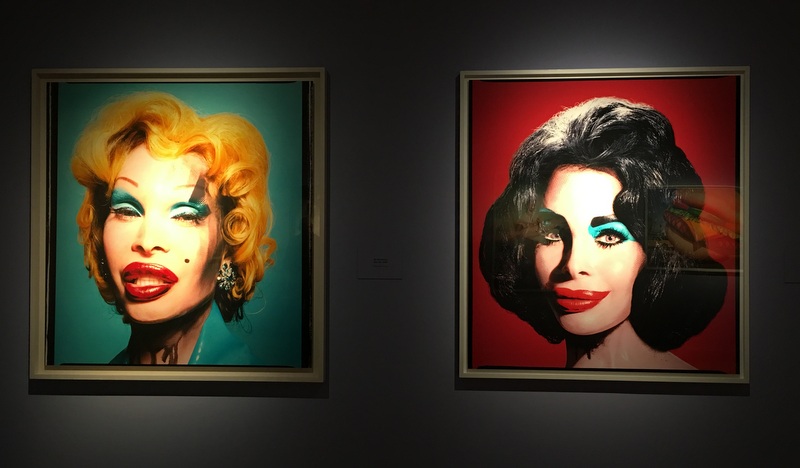 My Own Marilyn (2002) and  Amanda as Liz (Red) (2007) LaChapelle started his career in Andy Warhol’s Factory and of course knows about Warhol’s iconic portraits of Marilyn Monroe and Elizabeth Taylor.  These portraits are based on real photos , both with transgender Amanda Lepore as model. 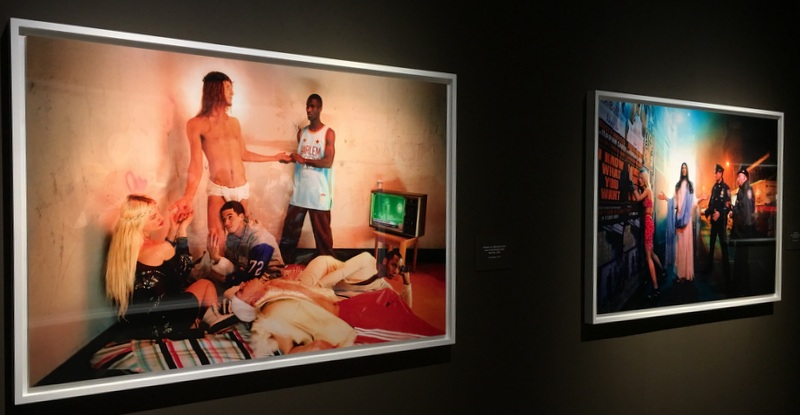 Evidence of a Miraculous Event (left)   Intervention (right)  . From  the series Jesus Is My Homeboy (2003) 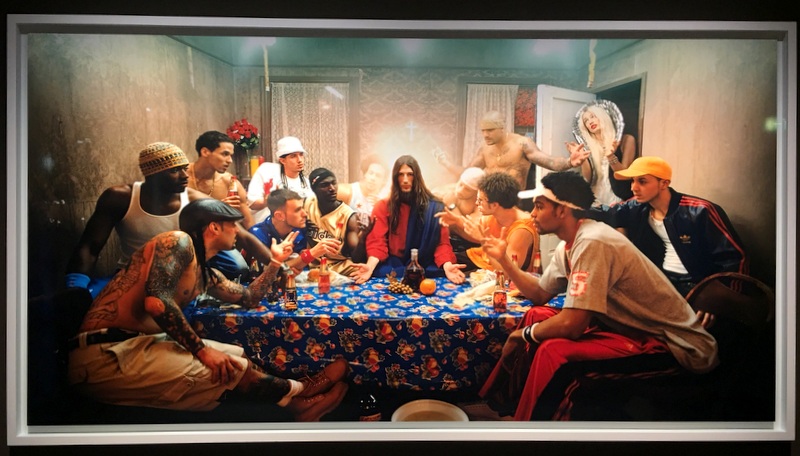 The Last Supper (2003). Of course inspired by Da Vinci, and also part of the Jesus is my Homeboy series.

Deluge (2007). This work, inspired by Michelangelo’s Deluge in the Sistine Chapel marks a change in LaChapelle’s work 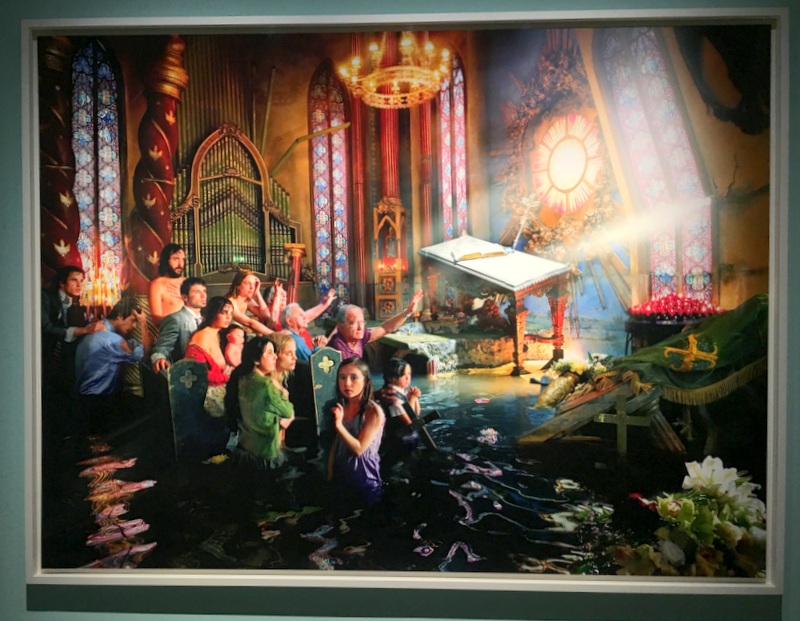 Cathedral (2007). Same series as Deluge, also referring to the Flood 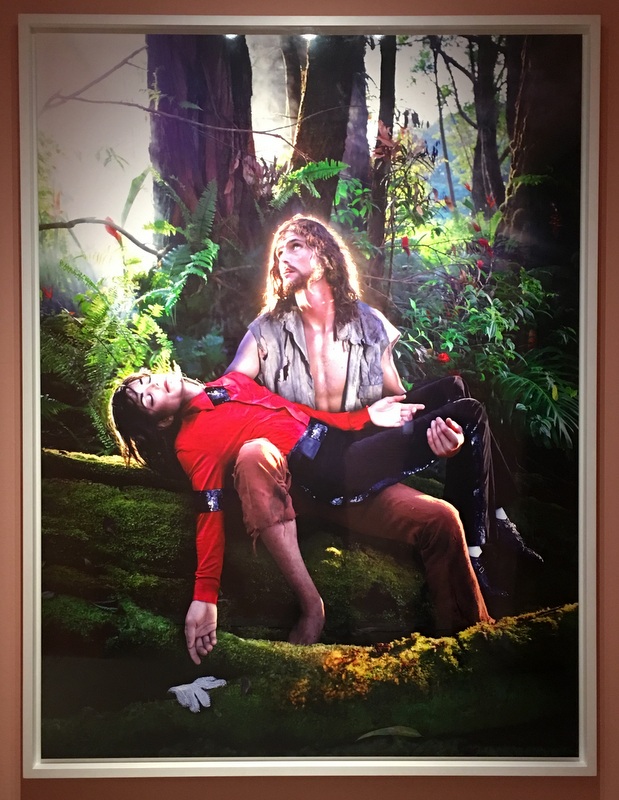 The Rape of Africa (2009). Inspired by Botticelli’s Venus and Mars. Venus is personified here by Naomi Campbell. 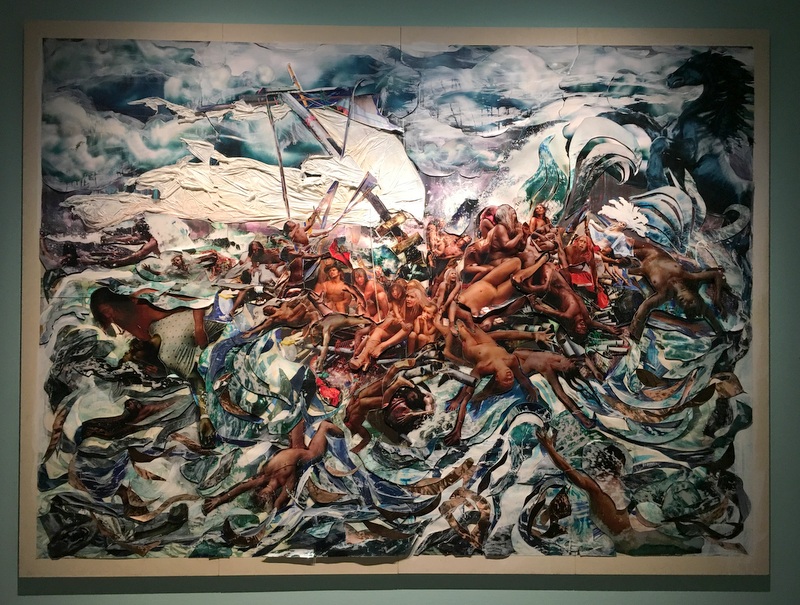 The Raft of Illusion, Raging Toward Truth II (2011). Inspired by Gericault’s The Raft of the Medusa. It is a collage, a work in progress, not often shown by LaChapelle

From left to right:  Concerning the Soul, Early Fall and Late Summer. From the series Earth Laughs in Flowers (2011) 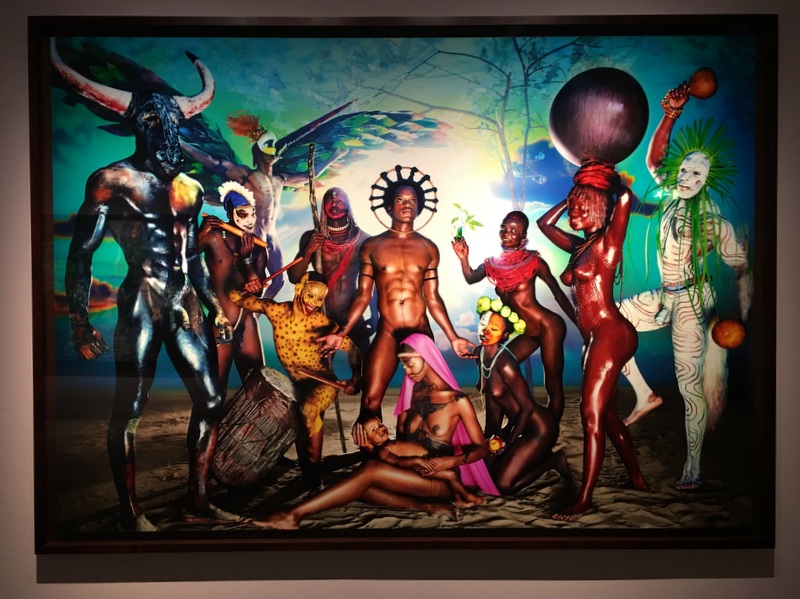 Nativity (2012) from the Paradise series 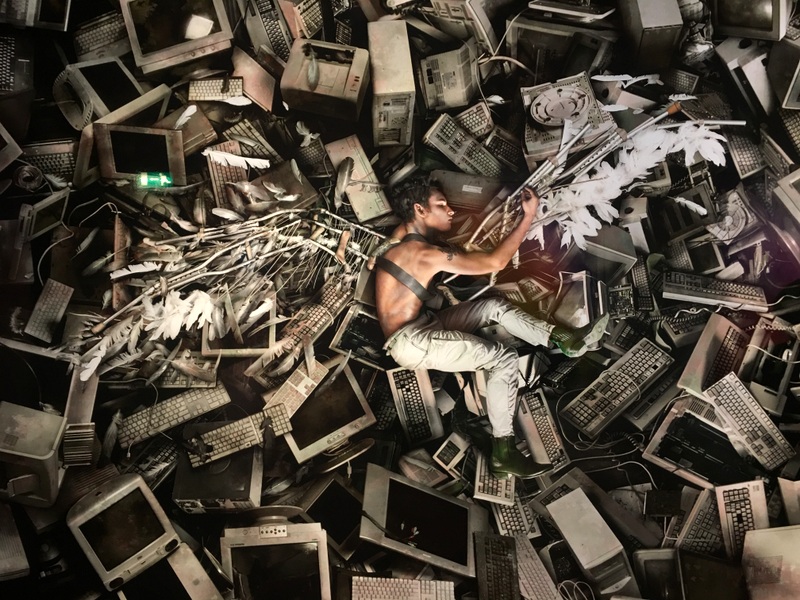 Icarus (2012) In Greek mythology, Icarus was the son of Daedalus, the inventor of a way to fly, using feathers and wax. In spite of his father’s warnings, Icarus flew too close to the sun, the wax melted and he fell down in the sea, where he drowned

Seismic Shift (2012), purchased by the Groninger Museum in 2018. It shows the Los Angeles County Museum of Art, ruined after an earthquake. Try to find the many works of art in this photo, by artists like Koons, Hirst, Warhol, and even LaChapelle himself…:-) 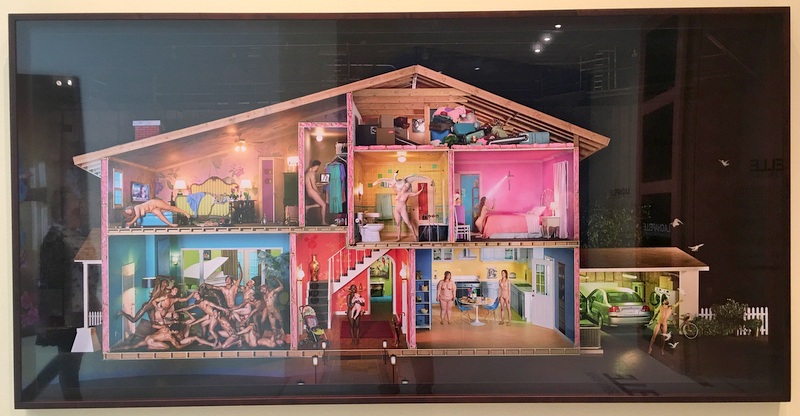 Self Portrait as House (2013) An intriguing version of a self portrait. The various rooms in the house depict aspects of the artist’s personality 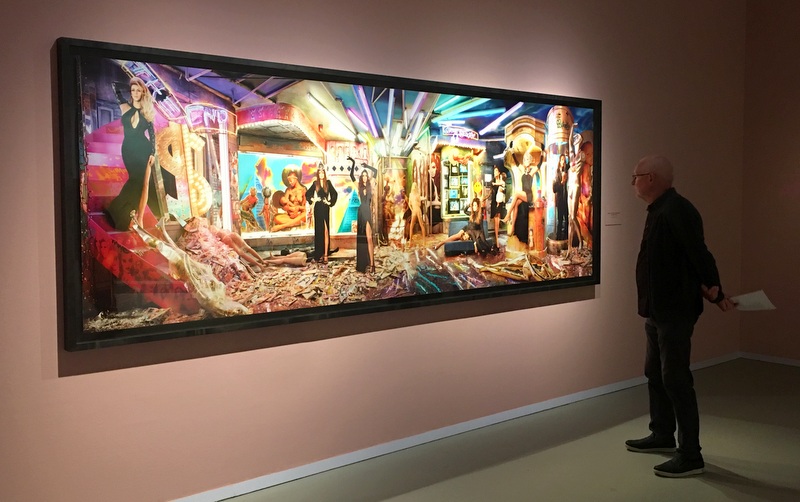 Kardashian Christmas Card (2013). Apparently the (in)famous Kardashian family spends every year tons of money for a “personal” Christmas Card. In 2013 it was LaChapelle’s turn, for 250.000(?) dollar 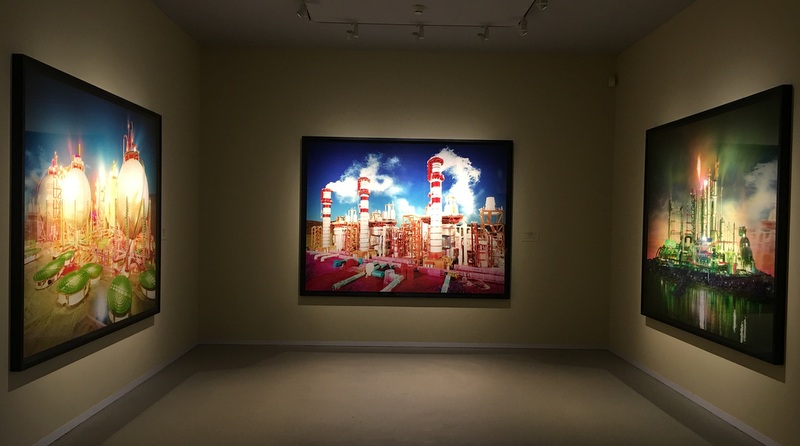 Land Scape series (2013) From a distance this may look like real refineries, but they are not. They are built from waste material like cans and straws in the artist’s studio. Click here for a video how LaChapelle did it: Land Scape part 1 and part 2 Amazing. 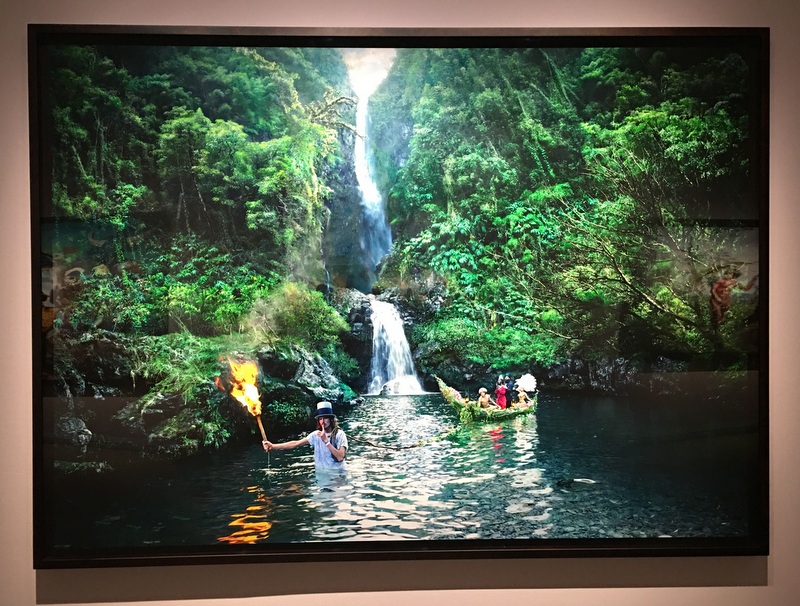 Secret Passage (2014) From the Paradise series

In his most recent series New World, LaChapelle imagines a world where many religions come together in harmony. The following pictures belong to this recent series 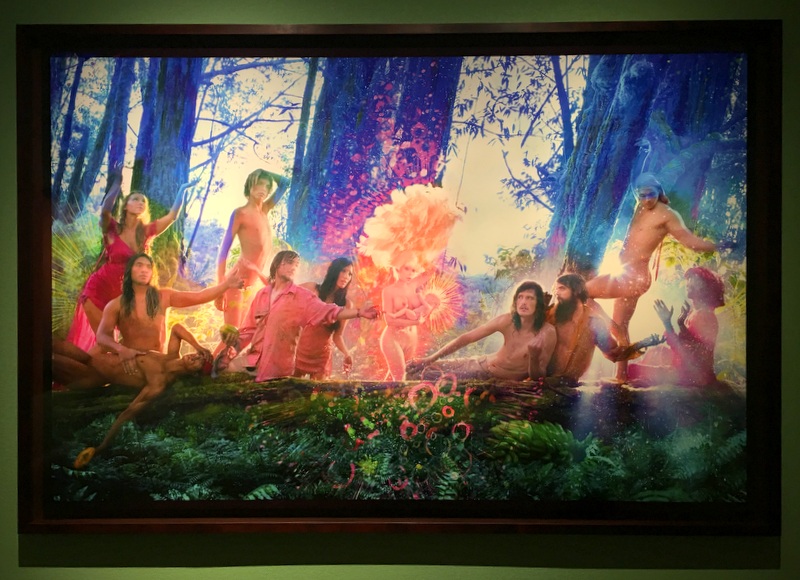 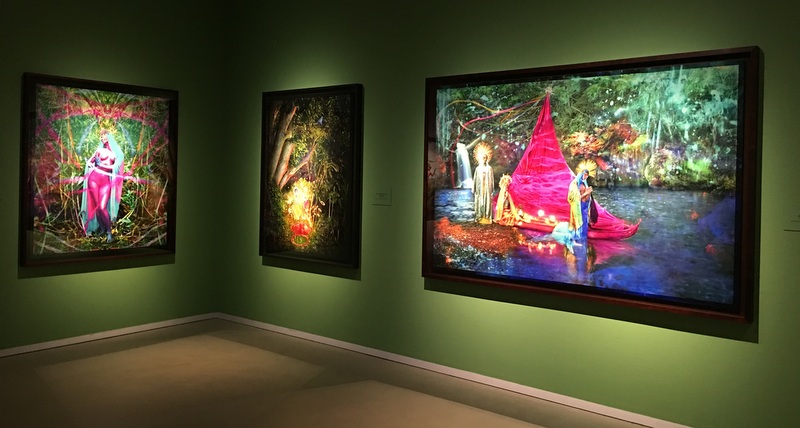 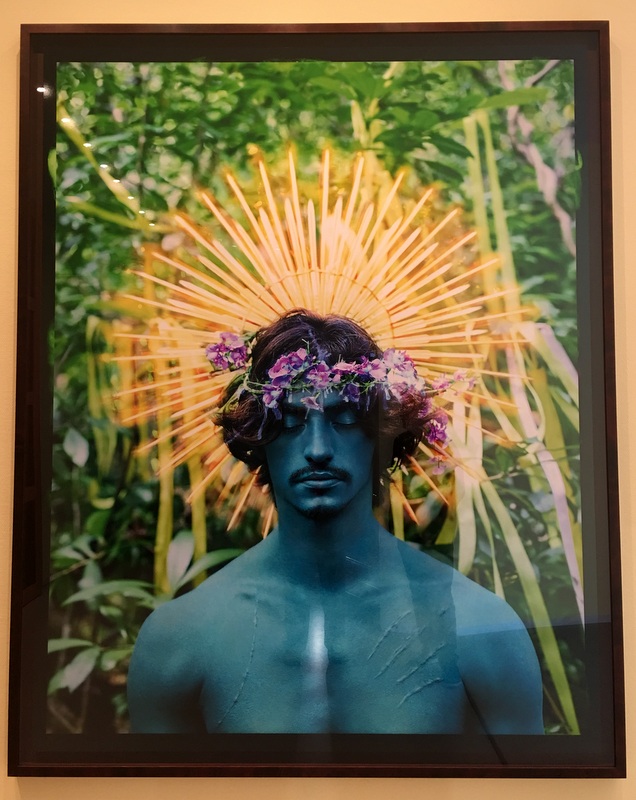 The exhibition can be visited until 28 October 2018.